The purpose of this paper is to reflect the issue of representation of the disadvantaged people in the bureaucracy in terms of the country’s contemporary demographic composition. It also intends to scrutinize the current trends of representation of women along with indigenous community, Madhesi, Dalit, disabled people and people from backward areas in the bureaucracy since the application of a reservation system in Nepal since 2007. Descriptive method has been used for analysis and the results are based on quantitative method used for the analysis and interpretation of the data. This article is based on the secondary data. The content and trend analysis have been made from the published and unpublished data and information in national reports, journals, thesis, newsletters and newspapers. Time series (since 2007) secondary data has been used for the study. The results of the study show that the country’s population consists of 49.50% male and 51.50% female. However, only 25.94% female are being represented and rest 74.06% males are still in dominant in the civil service system of Nepal in 2020. The data depicts that, the civil service has as high as 63.50% Khas/Arya but only 0.60% Muslim, 2.50% Dalit, 15.40% Madhesi and 19.5% indigenous people representations. Moral preference and commitment in recruitment and promotion to retirement is said to be the main reason behind the increasingly mono-ethnic involvement in the civil service of Nepal. Traditionally, males were over-represented in the civil service at all levels. However, the trend has been reconciled in recent years due to the continuing preponderance of female graduates and hence applicants for government jobs. Therefore, the concern over the representativeness of the Nepalese bureaucracy is less on class but more on gender and ethnicity representations. The growing trend of women and other class and ethnicity in civil servants in the recent years is positively expected to achieve the representativeness of bureaucracy with the national face. This article argues that the increasing ration of the representativeness in bureaucracy would ensure equitable, responsiveness, strengthen capacity and legitimacy of the government in the diverse society. 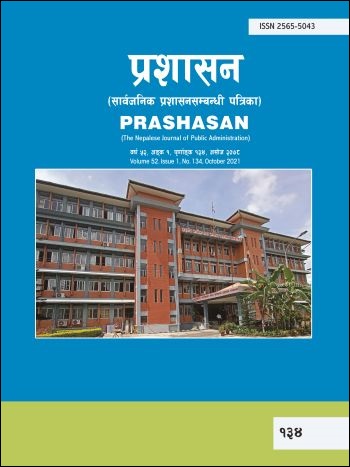