This study is carried out to explore the socio-cultural condition, knowledge and changing pattern for their environmental adaptation of Magar inhabitant at Bukini Tityang V.D.C. of western Nepal. There are 73 households of 450 population. The major subsistence activity of the local people is agriculture and animal husbandry. The economic condition of the majority of families is medium. Expenditure of the families has been increasing in high rate which raised question about cohesive bond of social structure. Out of total population, 76.67% are literate that is greater than national level. Young literate people do not have their applied knowledge in agricultural production and are also not attracted as well as interested about it. Most of the people are aware of the health and sanitation. Due to migration from different places co-dominance has occurred between different clans. This phenomenon is not only in cultural activity but also in physical structure of the children. There are 86 plant species used to heal the human and domestic animal diseases, 17 species for fodder, 14 species for making agricultural equipment, 25 species as wild fruits and 23 species for different rituals and ceremonies. The elder Magars are rich in indigenous knowledge while the younger are not. If older generation dies their knowledge will be vanished. The effect of modernization and acculturation leads towards the increasing rate of dependency about fooding, clothing and recreation activity which directly change the behavior of the local people.

Sapkota, Prakash Prasad is Teaching Assistant at the Department of Sociology/Anthropology, Mehendra Multiple Campus, Baglung. He obtained his M.A Degree in Anthropology and M.Sc. in Botany from Central Department of Botany, T.U. Kathmandu. He has been teaching in the department since 2004. He has conducted research on Ethno-medicine and published various research and general articles in both Sociology and Botany in different journals and newspapers. He is co-editor of Dhaulagiri Journal of Sociology and Anthropology.
E-mail:sapkotaps@yahoo.com 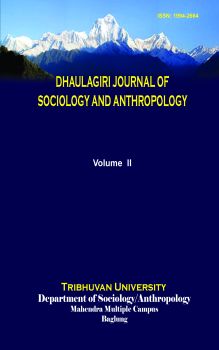