In mountainous country Nepal having large populations of culturally unique indigenous peoples poses threats of glaciers retreat and resource bases change. The indigenous people living in mountain plays the major role in carbon management. Further, the role and responsibilities of men and women varies differently in natural resource conservation and management. However, their participation in decision-making and benefit sharing is poor. The majority of women have unequal access to productive resources and decision-making process. Therefore, study on gender based agro-pastoral activities, their contribution on carbon management and decision-making process were carried out in Tamang ethnic group of Gatlang VDC of Rasuwa district, Nepal. For the purpose, 30 households were selected purposively. Similarly, four focus group discussions were carried out among the separate group of women, men and group consisting both men and women. Carbon management types: input carbon and output carbon activities were studied on men and women. In total, 23 different agro-pastorals related activities were found, among them 57% of work were supported by women, 39% by both men and women, and 4% by men only. With respect to fuel-wood, in average, 10 kg per day fuelwood is necessary for one household. The use of biomass for cooking emits chocking smoke and causes indoor air pollution. All these disadvantages lead to carbon emission which might lead to health deterioration of women by increasing the risk of cardiovascular diseases and respiratory disorders. The average fuel-wood requirement was found to be 840 kg/capita/year which are found to be higher than the other physiographic regions of Nepal. This is due to use of fuel-wood as only source of energy in the study area. Out of total respondent, it was observed that 30% literate men allow their wife to make joint decision on the major household issues. Similarly, 3% literate women respondents took the major decision by their own or jointly with their husbands. On the other hand, 30% illiterate men and 37% illiterate women either didn’t allow their wife or don’t participate in major decision-making process. Further, it is revealed from the chi square test that literacy plays major role in decision making (x2 = 5.625, df =1, p=0.017). Similarly, educated women actively join together with their husband in decision making. Moreover, women have high contribution in carbon input and output activities. Therefore, the women education should be promoted to make their equal and strong participation in decision making, which ultimately contribute in carbon input and output activities, through their greater roles in livestock husbandry and fuel-wood management relative to men. Further, importance of women’s role in carbon management should be given greater prominence. 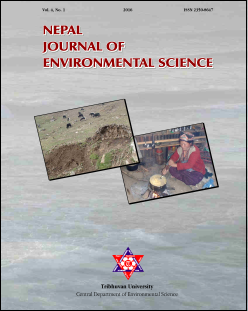