Material and Method: A descriptive cross-sectional study was conducted among 95 pregnant women during the antenatal period. A purposive sampling technique was used and data collection was done from November 15, 2019, to December 14, 2019. Ethical permission was obtained from the concerned authority. All pregnant women were interviewed during their antenatal visit and a semi-structured questionnaire was used to collect the data. Descriptive and inferential statistics were used to analyze and interpretation of the findings.

Results: The prevalence of anxiety was 32.6%. Among them, 18.9% had borderline anxiety and 13.7% had abnormal anxiety. More than one-fifth (21.1%) of pregnant women were worried about the sex of the baby. Although, 68.4% of them had occasionally felt tense, and 75.8% had worried thoughts from time to time. Anxiety during pregnancy was significantly associated with gravida, history of abortion, maternal desire regarding the pregnancy and worry about the sex of a fetus (p<0.05).

Conclusion: The status of anxiety was quite common during pregnancy and its occurrence is associated with the pregnant woman's gravida, history of abortion, intention of pregnancy and worried about the sex of a fetus. Antenatal screening for anxiety should be carried out early from the antenatal clinics for improving the psychological well-being of women. 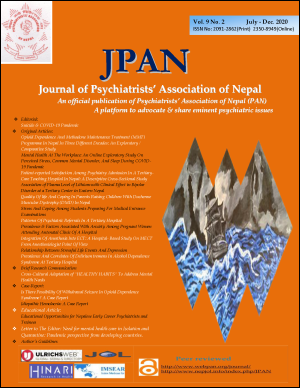