Seven Decades of Indo-Nepal Relations: A Critical Review of Nehruvian-Colonial Legacy, Trilateralism as a Way Forward

Nepal is one of few long-surviving nations in Asia. According to Pandit Bhagvanlal Indraji, a noted Indian historian, Nepal’s origin as a nation dates 12 years before the end of Dwapaayuga (approximately 1700 BC). The linguistic historian Bal Krishna Pokharel and Italian writer Guiseppe Tucci have narrated the historic succession of an empire with Sinja as its capital city including regions of Garwal, Kumaon, present Uttarakhand of India, and current Nepal’s capital city, the Kathmandu Valley. It is said that the powerful Nepal of that time had assisted Chandra Gupt Maurya to oust Dhana Nanda and establish the Mauryan Dynasty. These accounts plainly show Nepal’s antiquity as a nation with a history of glorious past, shaped by pearls of wisdom, serenity, and peace. Alongside, there are histories of mighty nations and civilizations both in the North and South where Nepal’s landscape and civilization always stand as a bridge between two mighty Empires ruled by several powerful dynasties and the world’s faveolus civilizations. However, from the beginning of the 19th century, Nepal lives in a turbulent time and series of turmoil. The genesis of chaos belongs to the British colonial occupation of India—as a fateful time in history. Nepal suffered from a British imperialist invasion beginning from 1814, ending at the loss of its larger part of the geography, namely Garwal and Kumaon, which now form the territory of independent India. Against this backdrop, this paper focuses on analyzing Indo-Nepal relations from a historical perspective. It assesses a winding history of Indo-Nepal relations followed by examining the 1950 Peace and Friendship Treaty, critically analyzing Indian claims and blames about China factor in Indo-Nepal relations, and explaining the role of geography and geopolitics in Indo-Nepal relations along with International Law and rules of International Relations incorporating the perspective of conspiracy theory. The paper claims that Indian foreign policy to Nepal has some faultiness and fault lines, therefore, she needs to correct her foreign policy towards Nepal based on equality in sovereignty and status. It adopts a qualitative method with descriptive, interpretative, and critical approaches. Lastly, it concludes that the trilateralism is the necessity of the economic boom of the region as a whole for the common gains and prosperity of all mankind of the South Asian region.

Yubaraj Sangroula is Professor of International Law and Philosophy of Law at Kathmandu School of Law. He has Doctoral Degree in 'Criminal Justice System of Nepal with Special Reference to Legal Framework and Practices of Interrogation, Extrajudicial Confession and State of Fair Trial' from Delhi University, India 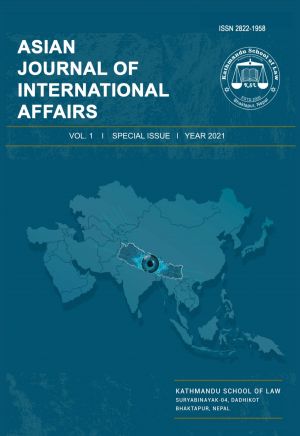 © Kathmandu School of Law and Author/s

No part of the publication shall be reproduced or transmitted in any form by any means, electronic or mechanical- including photocopying, recording, or any information storage or retrieval system- for commercial purposes without written permission from the copyright holder. Readers are, however, encouraged to quote or reproduce material from this journal with due acknowledgement to the author/s and AJIA for academic purposes.