Introduction: This study was undertaken to assess the clinical profile of children living with HIV at the time of their enrolment in an ART centre in Delhi. The study also attempts to understand association between clinical staging and immunological profile (CD4 count/percentage) in HIV infected children. The findings of this study may help policy makers to plan better health care of CLHIV in resource constrained country like India. The Objectives of the study were to assess the baseline clinico-social and immunological profile of HIV positive children before the start of Antiretroviral Therapy, to study clinicosocial and morbidity profile of HIV positive children at the time of their enrolment in ART centre and to study the association between immunodeficiency and clinical staging of CLHIV.

Methodology: The present study, conducted between December 2012 and March 2013, is a retrospective case review of 83 antiretroviral naïve Children living with HIV aged 8 months to 13 years and attending paediatric ART clinic of a tertiary care hospital of Delhi. After the infection was established on serological grounds, information on socio-demographic, clinical and immunological profile was studied. 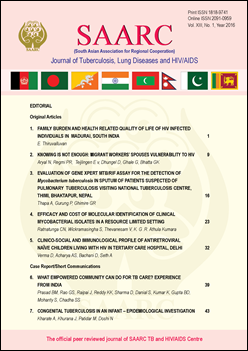 Copyright © SAARC Tuberculosis and HIV/AIDS Centre (STAC), all rights reserved, no part of this publication may be reproduced, stored in a retrieval system or transmitted in any form or by any means without prior permission of the STAC.