Introduction: Atopic disorder is very common globally and in Nepal which has affected quality of life resulting into loss of working and school days. Change in lifestyle is one of the important recommendations for fighting back with allergy, which suggests for avoidance of allergens developing allergic rhinitis. The objectives of the study were to find out common allergic conditions in Pokhara, Nepal and to identify the allergens, which induced IgE mediated disorder.

Methods: A retrospective study was done among the patients with different allergic disorders who were referred from different specialist clinic attending Pokhara ENT Center at Pokhara from January 2011 to December 2017. The study sample included 1810 patients to find the distribution of various allergic disorders among them. Further, a sample of 430 patients of allergic rhinitis who had undergone skin prick test according to international guidelines were included in order to find out the common allergens among them. Set of allergens included in this study were mites, pollen, fungus, insects, dusts, epithelia-danders, feather & fabric, non-juicy foods, and juicy foods. These nine allergen types further included several allergens. Data were analyzed using descriptive statistics using Stata 15.1. The study was done from after taking ethical clearance from the institutional ethical committee of Gandaki medical college.

Results: Among various types of allergic diseases, allergic rhinitis accounted for one fourth (23.8%) of the cases. The patients with allergic rhinitis who underwent skin prick test against various allergens were evaluated. Skin prick test positive test result were seen for non-juicy foods (96%), pollens (95%) and then juicy foods (93%). On the contrary, least percentage (13.72%) of people were found positive against feather & fabrics. Radish (7.7%) and snake gourd (6.99%) were only two juicy vegetables against which people were found positive in skin prick test. Among non-juicy foods, tobacco was the commonest allergens which was reported positive in skin prick test of 16% people. Pollen of Zea mays, Azadirachta indica, Mangifera indica and Prosopis juliflora were top allergens diagnosed positive among 12.65%, 10.95%, 7.79%, and 7.54% of people respectively. The mite Dermatophagoides pteronyssinus yielded highest prevalence (69.36%) of positive test.

Conclusions: Based upon the findings of our study, allergic rhinitis is one of the most common allergic diseases in Gandaki province, Nepal. Patients of allergic rhinitis should be tested for certain allergens which are locally present and they need to modify lifestyle and avoid allergens which can induce IgE-mediated disorder. Further research is needed to establish causation. 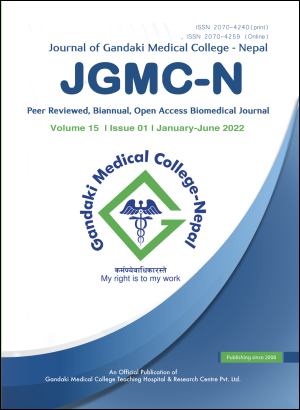 This license allows reusers to distribute, remix, adapt, and build upon the material in any medium or format for noncommercial purposes only, and only so long as attribution is given to the creator.